How to create a cohesive looking army

We've all got them, those little gremlins in our collection. I have actually been known to throw away the worst of my collection (pre-ebay) when my painting improved beyond a certain standard. I think my worst-ever figure was a skaven warlord, who i decided to paint using every colour in my collection. It ended up looking less like a savage rat-like warlord and more like my brother after the paintball session on his stag-do.

But quality of painting is not quite the point of this post. What I'm aiming for here is to provide some tips and pointers for creating a coherent army-wide scheme, regardless how well you can stay within the lines on any individual model.

In some ways, this also ties in with my post on cookie cutter lists and how to theme an army based on collecting models or playing styles you like. I'm going to use three examples from my own collection to illustrate my points, my Dark Eldar Kabal of the Burning Eye, my Bloodstone Knights (Blood Angels successor chapter) and my Cobra Guard (Codex Marines).

So first things first, what style do you like? Dark and brooding, mid-range colours, bright and shiny, camouflage? I've tried all of these at some point in my years in the hobby, and my personal favourites are the dark broody schemes, and the mid-ranged options. I really didn't enjoy painting camouflage at all, which is one reason why I gave up on my Imperial Guard aspirations. Bright and shiny can be good, but easily becomes incoherent if you're not careful (as per the skaven example above!).

A subsidiary point to remember in this situation is that in the right circumstances you can mix and match some of the above options (I wouldn't recommend bright and shiny with camouflage though, at least not on the same unit!).

Once you've got your base colour picked out you can start to think about the palette to go with it. In the above examples my Cobra Guard I wanted to be dark(ish) purple, but I like the robed look that alot of the dark angels miniatures had, so I wanted to accentuate that colour with a contrast. The purple I'd used was more on the blue side of the spectrum than red, and so I decided that my secondary colour should also use a blue base. In the end i went with a blue-ish grey (used to be space wolves grey, think the current equivalent is Fenris Grey). Both the purple and the grey use blue in their make-up, and so i opted for mithril silver for the weapons. This kept all the major colour within the 'cold' spectrum, and by limiting other colour use the army looks very striking when deployed together, with only vellum scrolls and seals adding a warm hue. 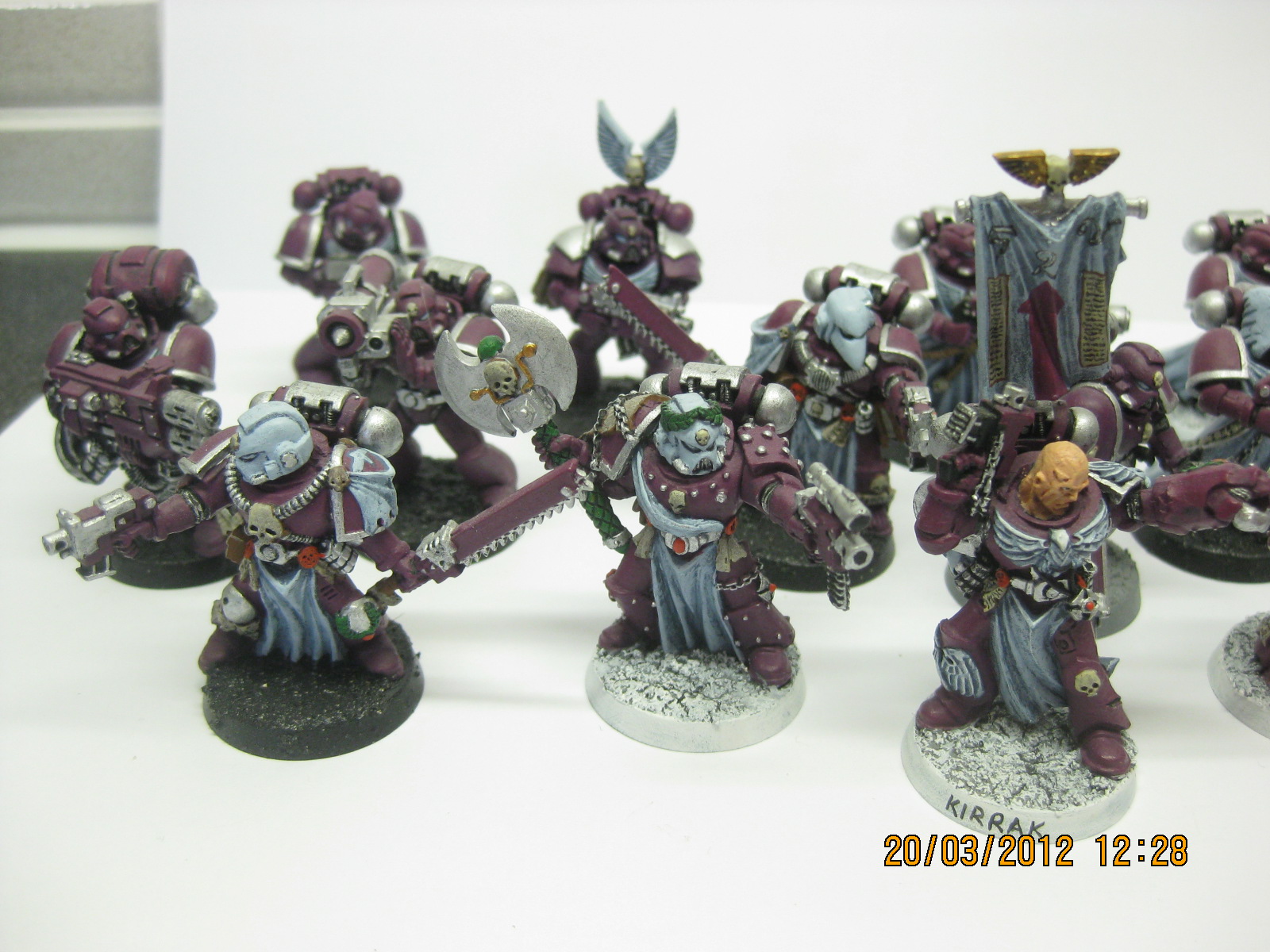 By contrast to that, by Bloodstone Knights are predominantly a warm-hued army, using red as their key colour (well they are descended from blood angels!). Again, I wanted to provide some contrast to that on the models themselves, and again I wanted to keep that colour within the same (warm) spectrum. On this occasion though, I had to reverse my previous method somewhat, as red has no component colours. Given that red is such a strong primary colour, I wanted the secondary element to sit in the neutral zone to avoid a clash. White was not an option, as that would result in the cool/warm combination i didn't want. This worked similarly for a lot of greys, and the red/black combination has been done to death so I was hoping to avoid that. I chose Rakarth Flesh, which has just enough of a warm hint to complement the red, without vying for prominence on the model. It also has the advantage that when I came to paint the death company equivalent, their traditionally black armour would also combine well with this second colour, and would still leave a neutral tone to allow the red slashes on their armour to really stand out (yes, i know I said I wanted to avoid black/red, but it's only on two units in the entire army). 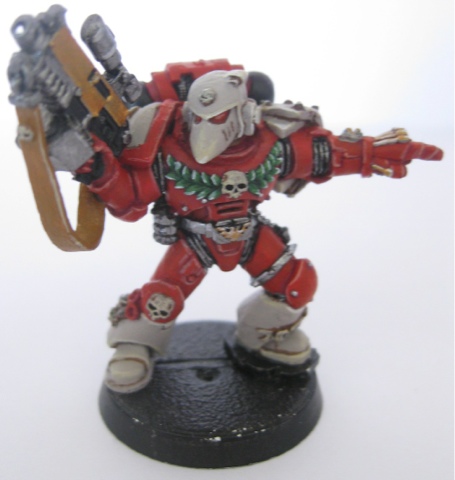 The last example (and by far the most complicated of the three) is my Dark Eldar, the Kabal of the Burning Eye. Having read the Dark Eldar Codex (and I would strongly suggest to all that if you're creating your own paint scheme, read the codex first as there may be clues in there to work from), it became obvious to me that the structure of Dark Eldar society is such that not all of the elements on a raid may come from the same Kabal, indeed the Kabals were just one element of any force, which may be accompanied by Wych cults, Scourges, Haemonculi Covens, Hellion Gangs etc.

My idea therefore was that my Dark Eldar force would represent several disparate elements. That made the paint schemes considerably more complicated, as they had the potential to look extremely 'bitty' and disjointed on the table top. I really liked the 'extreme edge highlight' style that GW used for their own Dark Eldar colour schemes, and so wanted to adopt and adapt it for my own collection. For obvious reasons I didn't want my Dark Eldar to have a light coloured armoured suit, going for a Charadon Granite basecoat with a heavy black wash over it, with extreme armour edge highlights. In the end I settled on the following method. 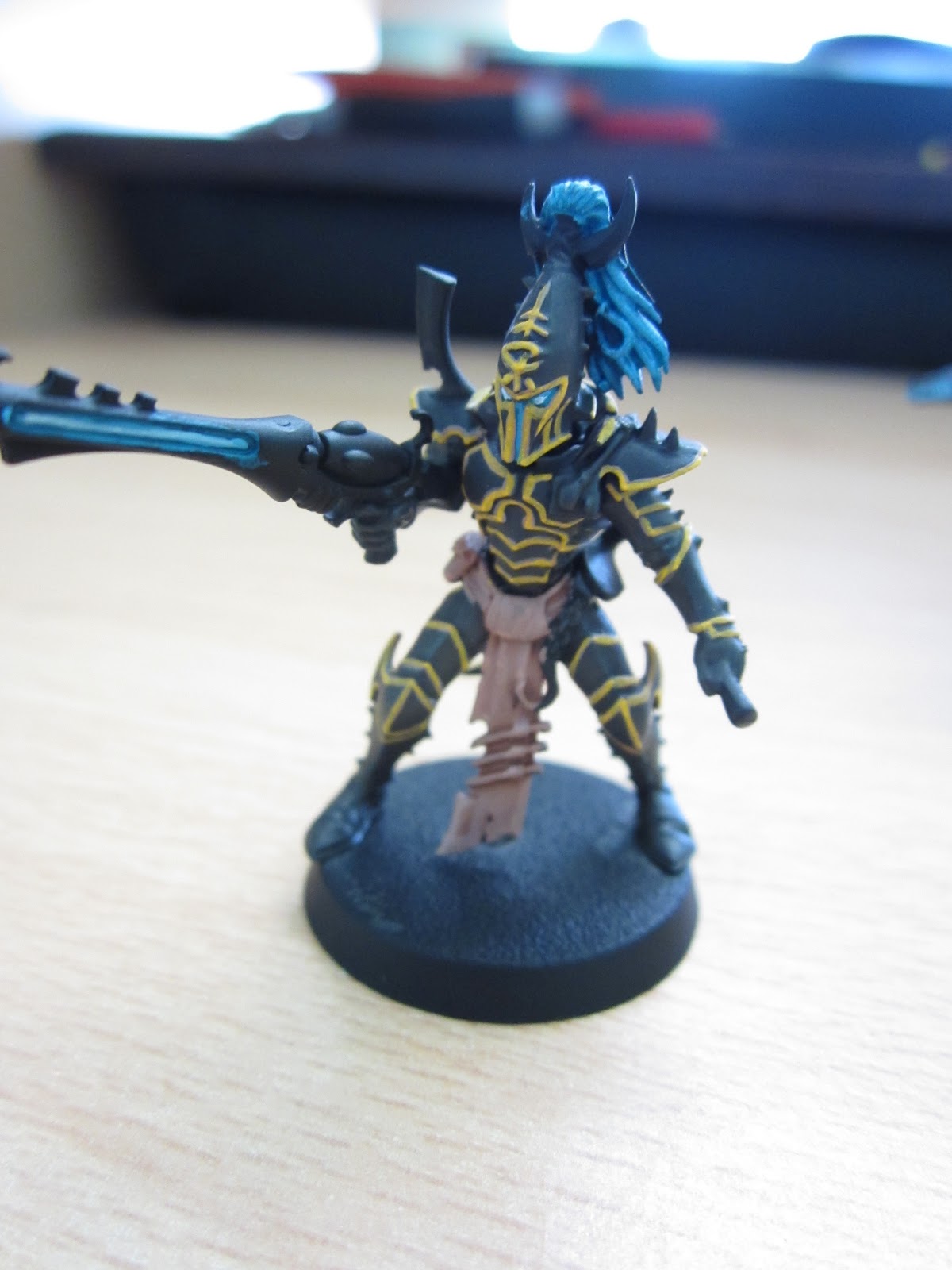 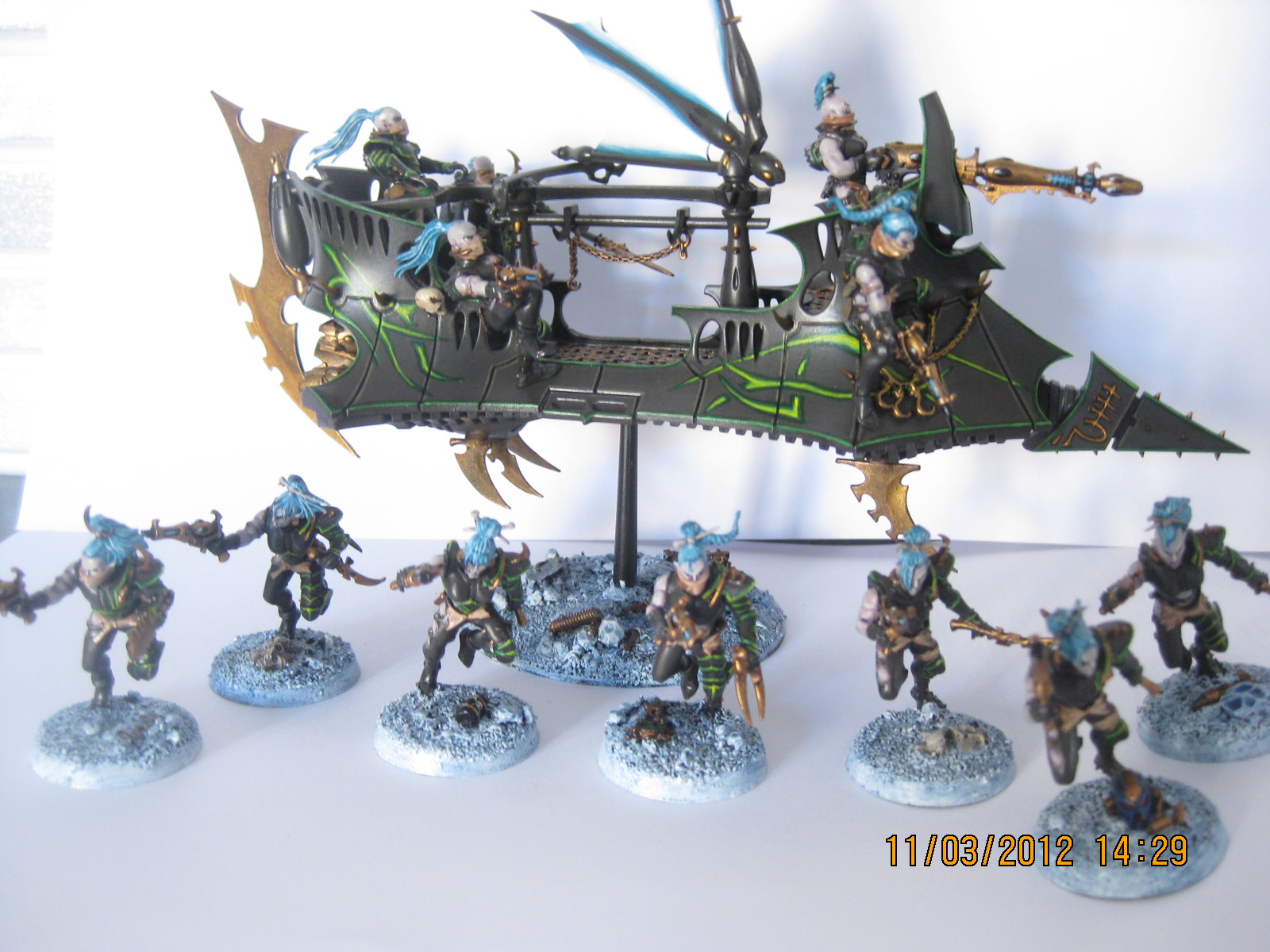 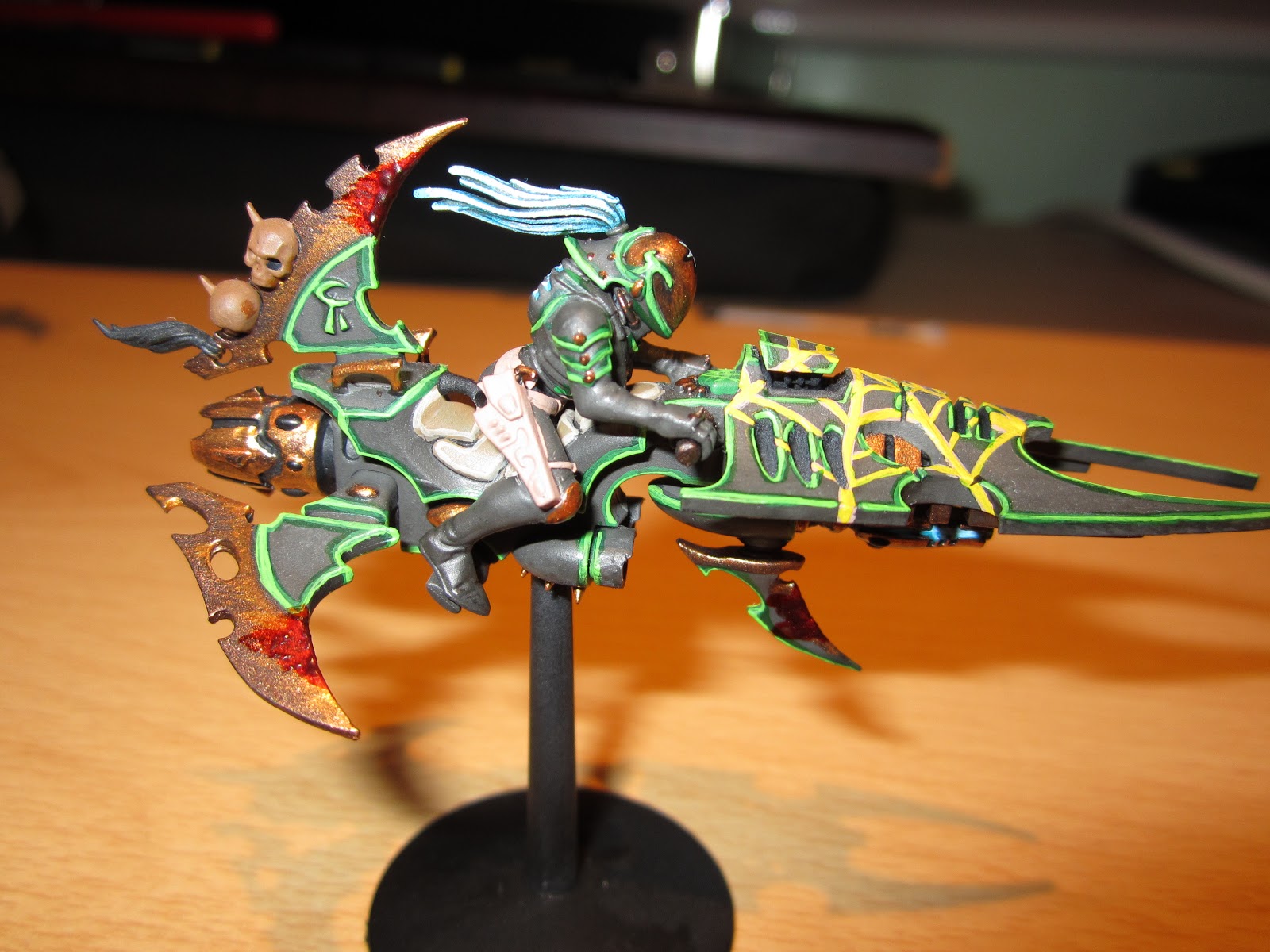 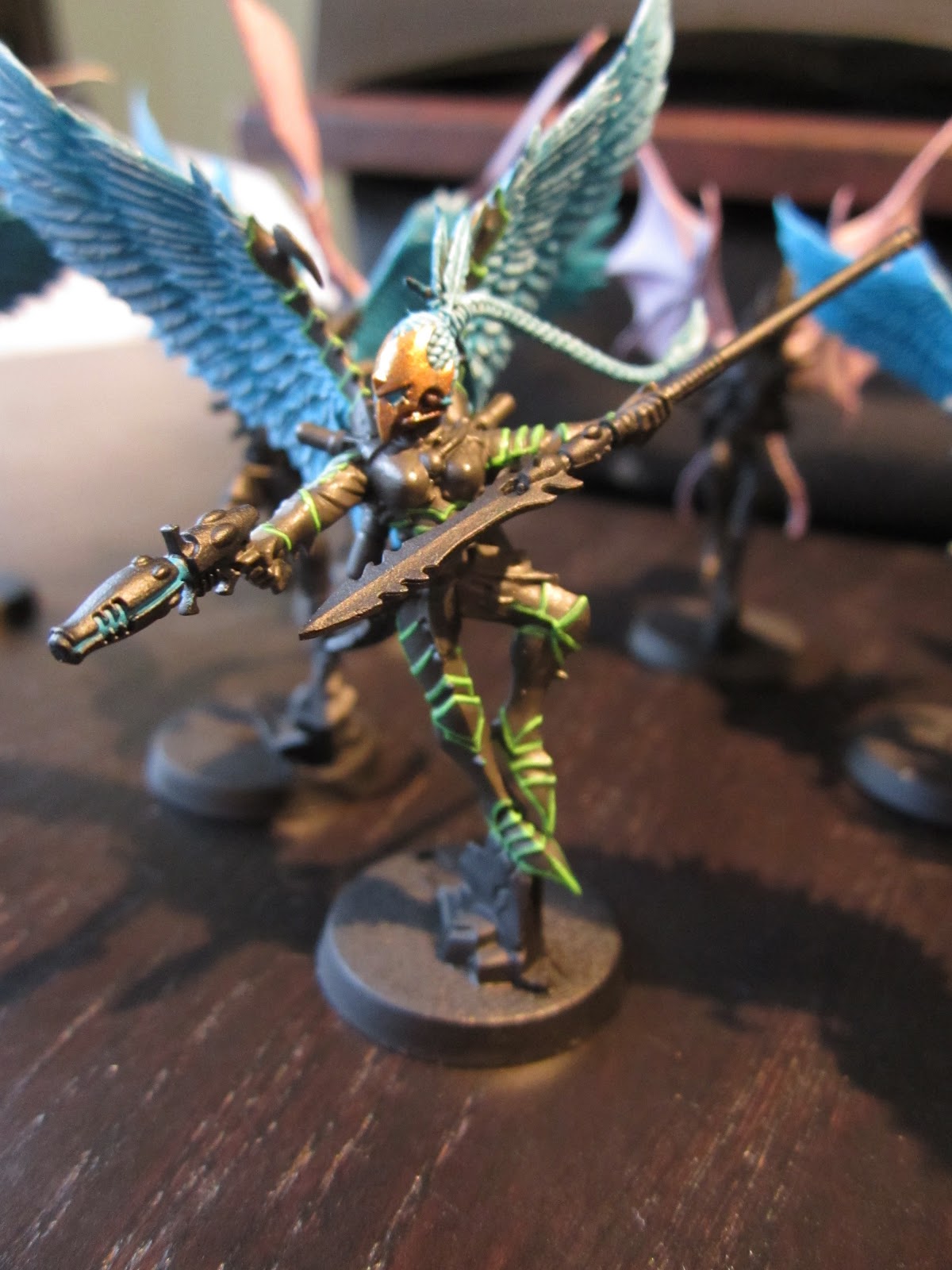 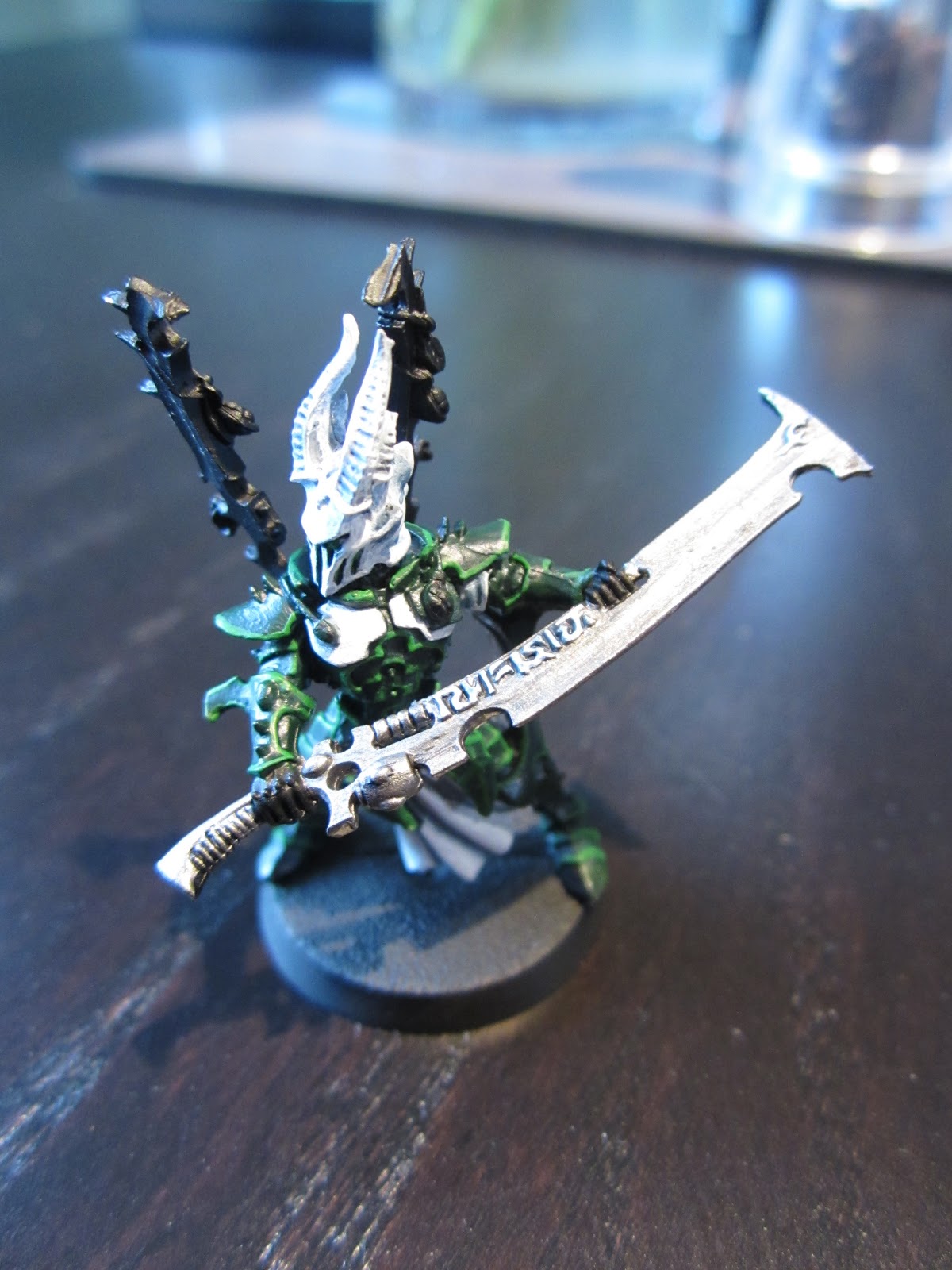 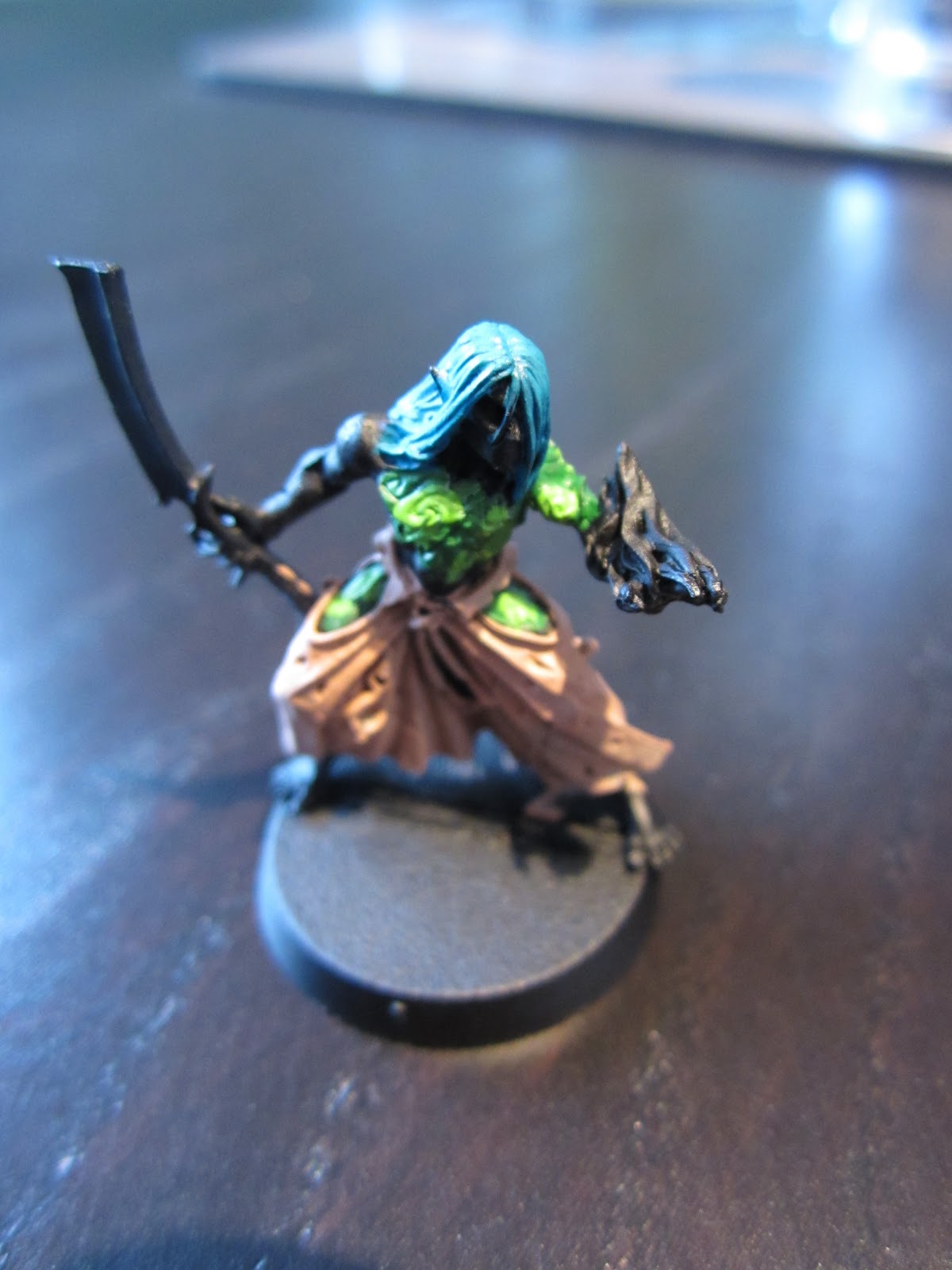 As you can see, the armour colour runs through the entire army giving it a base to spring from, and I've used three spot colours (two primaries and the secondary created by mixing them) in different ways on each of the model types to retain connections between the different elements whilst retaining a separate identity for each of the groups.

Lastly, you need to consider metallics. There are many armies on our tables that don't carry anything metallic at all (Eldar and Tyranids are the two that immediately spring to mind, possibly Daemons) and it's important that whatever colour scheme you go for, your metallics enhance it. As a general rule i go with warm hues = gold, cold hues = silver. There are a few tweaks to that (i don't generally go all out with gold if it's an imperial scheme, but pick out the most prominent parts and dull down the others with a black/brown wash). But it serves as a general rule.