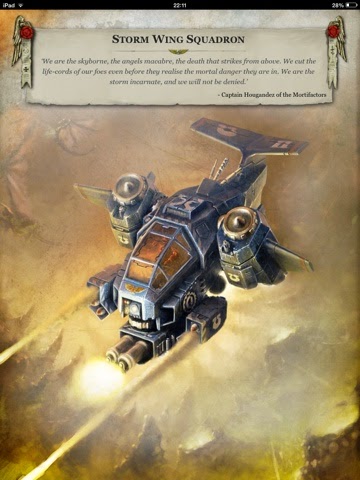 Hi all - today I have for you the first of two battle reports. This one features the stalwart warriors of the Iron Fists chapter betrayed by the imperium they strive to protect, as the Grey Knights are sent in to destroy knowledge uncovered regarding an ancient evil. Alongside the Grey Knights stood the misguided forces of the Salamanders.

So this was the fifth game in the campaign I'm running at my club, called the Desolation of Delta Tao. This game was slated for 1500pts and would be played using a modified version of the Big Guns Never Tire mission.

Now all the participants in the campaign have already submitted lists for each of the games, the idea being that those forces represent the resources available to them on the planet in question. After the escalation games there would be a final multiplayer mission where each player can only select their force from the survivors of the previous missions in an attempt to recreate the finite nature of a campaign force. I won't go into that any further at this point, but there will be a report once it's been played!

Now I've tried to put a few twists into the games for the campaign, including alternative missions, and the 1500 game was no exception. This was a little more involved though as I made 500pts of each persons force into a sideboard, so once they knew who they were facing and what was in their list, they could tailor up to 500pts to face that opponent.

Now as the campaign organiser I've been trying not to be too competitive with my list building, so I've themed everything. At 1500pts my theme was deep strike, so my original list comprised 2 librarians with 2 minimum sized tactical squads, my centurion squad, and then a drop pod ironclad, drop pod sternguard, and two jump pack assault squads.

I was drawn against MJ, so decided as I was facing power armour that the assault squads wouldn't be too helpful. Out they went, with one of the two libbies (facing grey Knights I saw little point me trying to cast too many powers). In their place came a formation I've been dying to try - the storm wing, which is two storm talons and a storm raven, all of which arrive together from reserve and are BS5 with pinning vs ground targets.

Finally, before I get to the action, the mission was modified to only allow a max of 1 point for killing heavy support choices - this is because the campaign scoring works on victory point totals and I wanted everyone to have the same potential number to score from.

I used a decoy deployment, placing my centurions and missile launcher tactical squad on my right, with the other tactical squad and librarian warlord on my left. That should allow my reserves time to focus on the rest of the army after dragging his forces out to one of the corners (preferably the one with the centurions).

The Dreadknight warlord, which was allowed to deep strike with re-roll scatter on turn 1 managed to mishap and went into ongoing reserve whilst the tactical squad in drop pod arrived near my missile launcher tactical squad. The bikes gunned their way forwards, though two suffered catastrophic collisions with trench walls as they did so.

The Salamanders librarian channeled the powers of the warp, but suffered catastrophic feedback and suffered a wound. The flamer tactical combat squad killed 1 tactical marine, whilst the melta squad killed another three. The plasma cannon devastator squad killed three from the librarian's tactical squad, whilst the assault cannons on the land raider redeemer wounded the lone remaining tactical marine on the right three times, though he passed all his saves.

The Librarian's tactical squad killed one of the bikes advancing on them, whilst the ironclad dropped in killing a bike on the right. the centurions opened up on the tactical marines, wiping the combat squad from the table.

The plasma devastators opened fire on the librarian's squad again, killing another, whilst the second combat squad on the right wiped out the solitary tactical marine. The termiantors with halberd, who had hammerhand cast on them, charged the ironclad, causing a single hull point of damage, though the ironclad failed to hit with any of its attacks. The 2 bikes charged into the centurions and caused a single wound, but they held.

The sternguard arrived, scattering the full 12" meaning they were beyond optimum range, and right in the land raider's target zone. They opened fire anyway, killing two of the plasma cannon bearers. The centurions killed one of the bikes, whilst the terminators finished off the ironclad.

As expected, the Land Raider toasted 6 sternguard with its flamestorm cannons, whilst the centurions who were now out of the combat took a wound after a storm of fire from the tactical squad, dreadknight, and bike. The dreadknight therefore charged in, wiping them out in the assault phase.

The Storm Wing arrives, though the twin linked multi melta targeted the land raider poorly, missing both the original shot and the re-roll. The Storm Talons made up for it though, their twin assault cannons targeting the dreadknight and stripping three of its four wounds. The librarian and tactical marine assaulted the bikes on the left, killing one.

Having suffered at the hand of the storm talons, the dreadknight shunted across the board whilst the plasma cannon devastators finished off the sternguard. the halberd terminators got back into the landraider. Everything else was either out of range or busy slapping each other in combat. 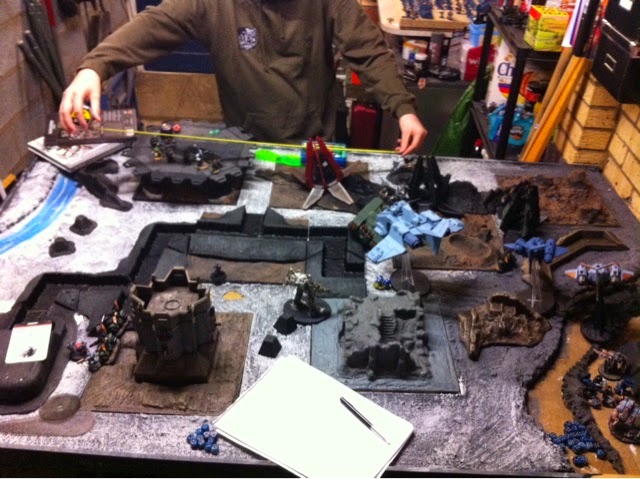 The Storm Talons split, one killing the dreadknight whilst the second finished off the last bike on the centre objective. The librarian killed a second bike and caused them to flee, though failed to catch them and keep them locked in combat.

The Land Raider gunned its engines to deploy the terminators back into the battle, but immobilised itself in the centre of the board. The last biker crashed, his armour failing to protect him from the high speed crash.

The flyers opened fire on the terminators this turn, killing two.

The plasma devastators opened fire once again, this time gunning down the last of the tactical marines on the left.

The librarian tried to gain a wound back by manifesting life leech on the devastator squad, but failed to cast with sufficient force and failed to get back onto the objective during the shooting phase (I needed a 2" run!). The storm raven failed to kill anything once more, though the storm talons once again proved their worth, killing a terminator and the grey knight librarian.

Well the game continued, with the plasma devastators and the salamanders librarian failing to kill my librarian, though the terminators took down a hovering storm talon.

That last act of defiance wasn't enough however, as the storm talon killed the last terminator and both it and the storm raven hovered onto objectives, claiming them for the Iron Fists.

With that, the game ended, and after totting up, it became clear that the iron fists had won a convincing victory, 12-4.

It also meant that my surviving forces for the carnage game were boosted, as I was able to keep the storm raven, one storm talon, my librarian and two drop pods alive.

Conclusions - the deployment tactic worked well - my opponent knows well enough how much damage the centurions can do and had to deal with them, sending the dreadknight, a bike squad, a full tactical squad and the terminators to that side of the board. Sadly my counter punch wasn't quite as coordinated or effective as I'd hoped - the poor marksmanship of the storm raven gunners meaning i had to rely on the land raider immobilising itself to limit the terminators mobility (it was about time though, Mj must have taken at least 6 dangerous terrain tests with it by then).

I was disappointed with my sternguard, but then rolling 12" for scatter was always going to cause problems, it was just a shame they ended up in range of the land raider.

I was pleased with my performance, and the margin of victory even lifted me to the top of the table in the campaign for a short while, at least until Ed played his 1500 match and won by an even greater margin!