A whole day painting - how much did I get done?

after the mania of the last couple of weeks I've finally got s bit of time to sit down and just do a proper painting post again! Rest assured, there's plenty more coming in the army builder series, but yesterday my wonderful wife took both our daughters out and left me at home for the whole day (actually, come to think of it she only brought one of them back - must ask her about that), which meant that I got to get the paint brushes out and have a really good go at things for a change, instead of doing half an hour here and there.

As always with days like this, my ambition far outstripped my ability, but there's nothing wrong with aiming high is there?

So, after a leisurely time getting up and filling up on bacon, this was what I selected to work on.
Now, in my defence, I was never expecting to get all of this done, I'm not the fastest painter out there by a long way (plus I'd got the odd job to do round the house), but one very supportive friend reckoned I might get as far as picking up the Storm Raven.

What I did manage to do though I was pretty pleased with - my Tau force now has just about everything painted at least to a tabletop standard, so I'm ready to unleash myself on the new models etc once my birthday hits. (I'm currently thinking of getting the ghostkeel, a tank or two and either some suits or broadsides, maybe some breachers depending on how generous family and friends are.

So, here's the remaining 14 Fire Warriors that only had cloth basecoated and washed. 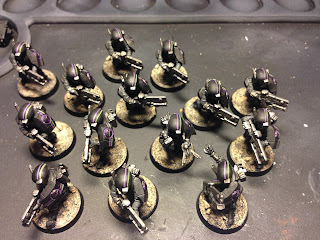 And when they were done, I got some major progress on the pathfinders, getting them complete too. 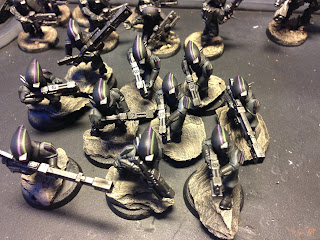 The pathfinders have had all their gun arms magnetised, so I should hopefully be able to substitute in some ion rifles if I deem the necessary (though they are currently on the sprues)

After that, I figured I'd try and make some more progress on the Iron Fists. GW re-releasing the Marine codex has meant that I'm sorely lacking in both painted models and models in my ownership for a lot of what I'd like to do with their formations, so some upgrading is required.

First off the conveyor belt therefore was the veterans - I love the 1st company formation in the book, so would really like to get up to the 5 unit maximum I can take as soon as possible, maybe with a view towards combining them with the librarius conclave and having a libby lead each unit.

Sadly whilst I was part way through these guys, i got a text message saying my wife was on the way home, so I had to pack up and get the hoover out, but still, two full units painted in a single day is pretty damn fine progress for me, so I'll count myself satisfied, and put the veterans into my work box for this week. 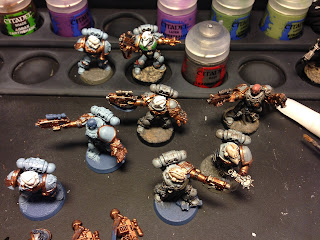