Hi all, I've got a battle report for you today, as the Iron Fists took on an alliance of Imperial Guard and Adepta Sororitas.

The battle was set for 1750pts, and we played the escalation mission from the maelstrom section of the rulebook.

My list was the following
CAD
Captain on bike with teeth of terra and artificer armour
Veteran squad on bikes with apothecary, two power swords and two power axes
2x full bike squads, one with two melta guns and an attack bike with multi melta. The second had no upgrades.
Two storm talons with typhoon missile launchers
Three lascannon/missile launcher centurions
Thunderfire cannon

To that I added two sniper scout squads, one full strength and one five-man, and a squad of scout bikes to make up a 10th company task force.

I faced a small guard detachment including a pair of wyverns, one ten man squad with lascannon and some plasma guns, a platoon command squad
A cannoness, three exorcists, two flamer squads, and two melta squads, a multi melta immolator and a lascannon turret. Oh yeah, and a culexus assassin!

I deployed second but failed to seize the initiative. For warlord traits my opponent could discard his opening tac objective hand and re-draw it. I got stealth (ruins), which meant my centurions would be getting 2+ cover!

I kept the scout bikes back in reserve, and won the roll off to deploy the small scouts in the centre of the board, and the larger squad on my left flank. 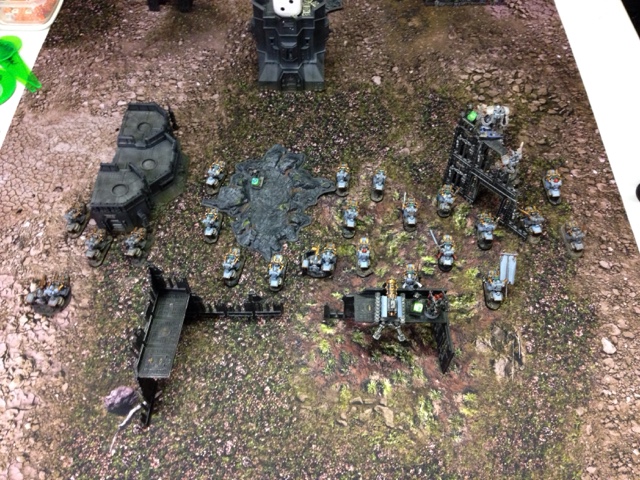 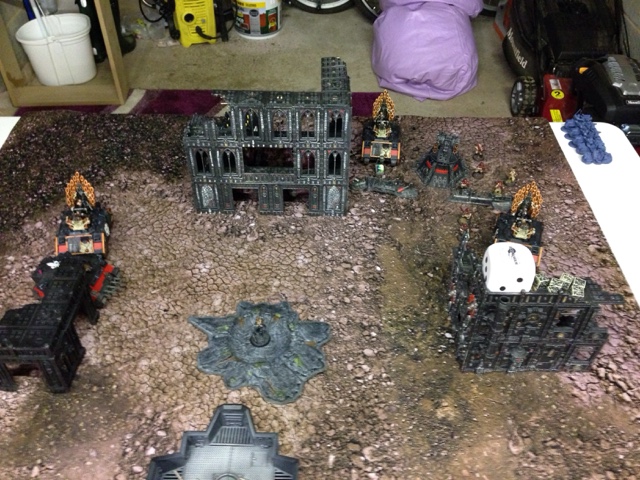 Sisters/Guard
The Culexus assassin shoots at the scouts, but their 2+ cover saves them comfortably. An exorcist opened fire on the bike combat squad with the multi melta on my left flank, killing one, whilst the wyverns opened up on the small scout squad in the centre of the table. The mortars were as accurate as ever, causing 22 hits and 12 wounds. Thankfully I only lost 3 of them, having rolled incredibly well for my armour saves. That saved my conceding first blood, and the two remaining exorcists opened fire on the two other troops bike squads, killing one from the combat squad with two melta guns on my right flank.

Iron Fists
All the bikes advanced, leaving just the thunderfire and the centurions to do some shooting. They didn't let me down, and despite the wyverns being partially hidden by a ruined building, the centurions managed to strip a hull point, and the thunderfire dropped its payload directly on top of the tanks, wrecking them both.The large bike squad in the centre of the table charged the Culexus, causing a single wound.

Sisters/Guard
The two outflanking melta squads arrived, one on each flank, lining up shots against the thunderfire cannon and the multimelta bike squad. The guard squad shot at the melta combat squad on my right, killing three of them (lots of plasma) though 1 gun overheated and killed its bearer. One of the exorcists finished off the last bike from that squad. The melta squad and exorcist on my left combined their fire to shoot at the attack bike's squad, causing just a single wound on the attack bike itself. The three storm bolters on the vehicles on that side of the table then opened fire, killing twoo bikers! The other melta squad on my right destroyed the techmarine, having passed their act of faith to ignore its cover. In the central combat, the Culexus killed the biker sergeant but his comrades wounded the assassin a second time in return.

Iron Fists
All my reserves arrived, the scout bikes popping up right in the rear right corner of the table, stripping 2 hull points off one of the exorcists on that side, whilst the large sniper unit downed three of the melta-bearing sisters on my left flank. The multi melta missed its target, whilst the Captain opened fire on the melta squad that had vapourised the techmarine, killing one before charging into combat and finishing them off. One of the storm talons finished off the melta squad of sisters on my left flank, whilst the centurions split their fire, wrecking the exorcist that the scout bikers had targeted, and the other two stunning the rhino on my right flank that had transported the melta squad. The command squad charged the guard squad in front of them, avenging themselves for the death of the melta bikes. The bike squad in the centre of the table finished off the Culexus, who'd had trouble wounding them thanks to their enhanced toughness.
This turn I scored 1 vp for first blood.

Sisters/Guard
The platoon command squad advanced on the scout bikes, whilst the last squad of sisters arrived on my left flank - the disgorged flamer squad toasting 6 of the sniper scouts. The two remaining exorcists targeted the storm talon and the central bike squad, but only managed to kill a single biker.

Iron Fists
The centurions finished off the rhino on my right flank and took a 'hull point' from the lascannon emplacement that was hampering the movement of the storm talons. The scout bikes opened fire on the platoon command squad, leaving only one man standing who failed his morale test and fled the board. The large bike squad in the centre of the table failed their charge against the sisters squad holding an objective, but thanks to the storm talons and some nifty bike work from my Captain I managed to score supremacy for 2 vps and objective 5 for another. I led 4-1.

Sisters/Guard
The second flamer squad dismounted, targeting the central bike squad along with the exorcist on the left flank. They took two casualties and a wound on the attack bike, causing them to fall back. The flamer squad further back on my left flank targeted the scouts again, killing two with the remaining pair falling back. One of the storm talons was forced to jink as it was targeted by the immolator's multi melta, but managed to avoid the searing blast. The rhino on the left flank finally killed the multi melta attack bike. The exorcist at the far end of the board on my right targeted the command squad, killing the apothecary I'd foolishly placed at the front of the squad.

Iron Fists
The centurions moved further out into the board, lascannon beams stabbing out into the lascannon fortification and causing it to come crashing down. The storm talons combined their fire to destroy the immolator in a hail of assault cannon rounds and krak missiles. The large bike squad shot and then charged the squad of battle sisters in front of them, wiping them out as they fell back from combat. In the final act of the game (lunch was ready!) the small scout squad killed the heavy flamer bearer.

The final score therefore was 8-4 in favour of the marines.

In conclusion, the bike list worked really well, despite being fairly quickly thrown together. With a few more tweaks I'm pretty sure I'm going to be happy to keep this as the basis of a standard list going forward. On the flipside of that, bikes are very much the rock to the sisters scissors (see what I did there?) as the list is very full of melta weaponry but the ability of the bikes to jink that away neuters much of its strength.

I think possibly in the future I might look to shrink the size of the bike units but increase the special weapons in them, maybe even getting some grav guns for an alternative command squad (there, I said it!)