Greetings all! Time for another hobby update once more, and though I posted up a showcase on my terminators as an extra hobby post last week, they're still the focus of the hobby update this week. Yes, I'm that pleased with them! There is other stuff (including a cool Dreadtober style idea) though so read on...

Well this is it, they're finally finished! I've spent the last 27 days working my backside off to get my squad of Cataphractii terminators finished, and I've done it with four days to spare (hmm, those four days require me to paint a libby from scratch and finish a drop pod...)

Genestealer Cults - planning, building and painting two armies at once!

Greetings all, welcome to this kind of announcement post for my most ambitious project yet. No, I don't mean these guys are getting a better paint job than my other armies, I mean that this project plan will combine my plans for an Imperial Guard army, The Bromheads, with my wish for a genestealer cult force, which is currently unnamed. These armies will form the basis of some of our plans for the brotherhood blog/forum and battle reports for that project, giving us two more armies to utilise in displaying narrative gaming at its best.

This post therefore is all about setting out how I'm going to make the most of the bargains you can get to make two armies that will look unified on the tabletop when used together, but are sufficiently different from one another so that they don't simply look like I've painted two armies the same. Taking into account of course that I don't actually own the Astra Militarum codex at the moment either!

Not one to let that sort of thing hinder my planning for a new army however, I did what all good Guardsmen should do when the way in unclear - I ploughed on ahead regardless!

Some of you may remember way back when, when I was first looking at developing my paint scheme for the Bromheads, I bought a box of push fit guardsmen, and gave them a quick run over with some paints based on the British Army uniforms of the late 1800's, and this is what resulted. 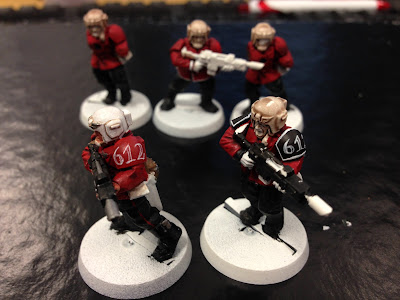 I'm still wedded to this as my Imperial Guard colour scheme, so if I'm going to combine this with genestealer cult and have them on the table at the same time, then I'm going to have to do something quite clever with them.

Annoyingly of course, you can't get cheap push fit cult models, so I'm going to have to do some theorising as to how the colours will go together, but that's ok since I'm pretty good at picturing this sort of thing in my head.

Clearly as with any Guard force, that will have to be a horde army, and I may even have to resort to batch painting techniques to get it done, but equally the Genestealer Cult are horde-like, so my brushes will be earning their keep next year!

The Guardsmen are issued with a uniform, bright, clean, and more to the point, uniform. By contrast, the genestealer cult have no uniform, the models have been designed so as to display a certain amount of uniformity, but even so they have no justification for being clean and crisp.

So we'll start with red, it's the key colour for the guardsmen and therefore the scheme as a whole, so I need to figure out some way of using red as the base tone for the cult without making it look too similar.

I think at this point in time I'll be using Khorne Red as the base tone for the cult, with Mephiston red as the base for the guardsmen. Mephiston Red will then get my standard combination of shade and highlights (Agrax Earthshade, then layer with mephiston, evil sunz scarlet and wild rider red) whilst I'll base the cult with Khorne red, then try and highlight up from there to bring the two closer together. I'll experiment a bit this week using Khorne Red and Mephiston to see if they combine well.

Then the contrasting colour is also important. The Guardsmen will be having white trappings and black fatigues, so again I need something that reflects those combinations but in an entirely grubbier fashion whilst not looking out of place alongside them. At the moment I'm thinking that the white for the guardsmens details could be replicated in a dirtier 'bone' style colour for the cult, which would also then tie in nicely with the exoskeleton on the purestrains, and I could still throw a little pure white in as highlights.

Skin on the purestrains could still probably be done in the classic purple hues of the genestealers without detracting too much from the overall look.

And there you have it, I quick and simple look at how I'm currently planning on painting up the two differing aspects of the army I'm going to be working on without mirroring the scheme completely, allowing me to not only build two armies alongside each other, but also use them together in a unified colour theme on the tabletop whilst still being able to use them separately against each other and still have the scheme distinctly separate.

First, let me apologise for not posting more last week, the days got away from me! Second, I've got therefore what is a bumper post of progress to show you all!

Right then people, time to sit up and take notice, as a very nice (and very tall) man in a brown uniform knocked on my door this morning (thankfully about ten minutes after my poorly 1-year-old had woken up from her nap). 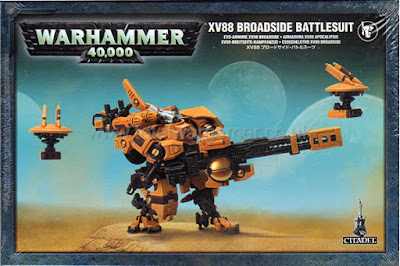 Hi all,
Monday again, it's must be time to update you the progress of my various hobby projects from the last week.

Looking back, I can see that last week I showed you the first three terminators of my monthly challenge. I can proudly now show you the first combat squad completed!

I've really enjoyed painting these fellas up, and even though each one has taken a couple of days to complete, I've not got bored of them yet (must be that whole no batch painting thing)!

That being said, my good buddy Tom did provide me with some underhanded distraction on Thursday, as I became the proud owner of another box of crisis suits and a broadside. It's almost as if he doesn't want me to finish our challenge I think!
Still, I ploughed on regardless for a whole day, getting this pod weathered at last.

I've gone pretty heavy on the weathering on this one, mainly because I can easily imagine the paint on a drop pod is probably the last thing on an artificer's list when returning from a campaign.

After that I did get sidetracked, and put together the broadside suit and primed it ready for painting. It's actually the last model I needed to be able to field the retaliation cadre from the Tau book so with the new suits I should finally be able to actually field a farsight enclaves Tau list, though I still need to do plenty of work on that.

I further caused myself a few problems by starting the paintjob on that when I should really have been painting terminators. Oh well, nevermind, I've got most of Saturday in my local stockist teaching people to paint so hopefully I'll be able to bash out a few terminators then instead.

In the meantime, here's the first WiP of the Broadside with my new Tau colour scheme, sans highlighting, then a few more pics of the terminators.

Greetings all,
It's been fairly quiet on the brotherhood front externally for the last few days, but believe me the gears of the machine have been whirring away frantically in the background, I think my Whatsapp is about to overload from the pressure and I've actually had to recharge my phone more than once a day for the last week, which is unheard of!

Everybody loves a man-cave! 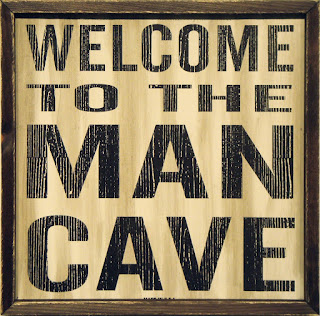 no draft posts in the queue close to publishing, didn't post anything yesterday, but feel the need to publish something. Welcome to some random thoughts from my head and a quick update on everything I'm doing hobby-related at the moment!

Greetings all, time for another hobby update and as you can see from the above, I've been very much focused on getting the Cataphractii terminators painted and the squad is now 30% done, hoping to get another mostly done tonight.

A few days ago (probably more) I posted up to say that I would be running a giveaway to celebrate hitting 400 posts on my blog, and I've finally got round to doing something about it!

So, what are the rules?

1. UK entrants only (postage costs abroad stretch my budget too far at this point I'm afraid)
2. You must sign up to follow the blog using the google+ gadget on the left hand side of the blog.
3. Leave a comment below stating why you love my blog and an excuse as to why you haven't signed up to follow it already ;). Only kidding, you do need to leave a comment, however the topic for your reply is 'what is the one thing I'd like to see included in a tournament to encourage fluffy, narrative led gaming and list building.
4. You have until the 31st October to enter, at which point I will choose the winner from amongst the entrants based on what I consider to be the most interesting, original and innovative response. Clearly therefore my decision is final.

I will then contact the winner to arrange delivery of the item.

Good luck, and get your thinking caps on people!
TBE

The secret is revealed! Welcome to the Grim Dark Brotherhood.

Greetings all! You've waited patiently, guessed inaccurately at my sneaky hints, but the time is finally here, and I'm lifting the curtain on the Grim Dark Brotherhood!


Greetings all,
what's this all about then? Well, some of you may know, most of you probably won't, but for a brief period in 2000 I actually worked at Games Workshop's headquarters in the Warhammer World store.

Heady days, and I was highly excited to be working there and seeing people like Rick Priestley and Andy Chambers in the canteen at lunchtime, people I'd grown up idolising as a teenager (I can't tell you how many times I read the tactics article by Andy Chambers at the back of the Skaven army book). 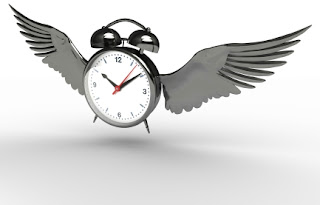 Tempus fugit and all that - three-quarters of the year is done! September is over so it must be time to review my hobby achievements over the year once more! As ever, I'll remove resolutions that have been completed so they're not clogging up the review.

Greetings all, welcome to another hobby update!

Stellar progress this week quite honestly, with lots of completed stuff for the Dusk Knights (well, it feels like lots of stuff at any rate)!

When I last update you all, I had just finished the Hailstorm, my Dusk Knights Landspeeder. Sadly it didn't get too much chance to perform in my game on Thursday as it got targeted by a havoc autocannon squad, but I'm certainly willing to give it another chance (I'll have to, a squadron of them is a key part of my plans...)