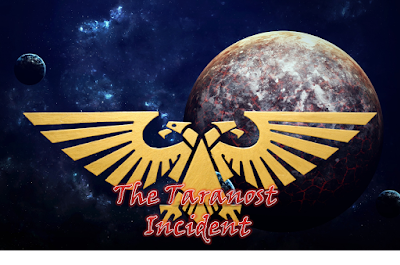 The enemy warriors broke into a run, slight figures swathed in shadow flitting from building to building. Blaze waited, his hand gripping the haft of Sanguine Judgement, its null-field glowing a dull red around the runes etched into the blade. He carried no ranged weapons, the halberd held confidently in one hand whilst in his other he carried Angel’s Wing, a storm shield crafted to resemble its namesake. All he could do was wait for the enemy to close the distance, if he revealed his presence too early then he risked them falling back into the shadows away from the fight.

Above and to his right, he heard the gentle coughing of Nyx Shadowbind’s Stalker bolter sending lethal rounds into the distance. Despite his white armour, Shadowbind was impossible to make out in the upper reaches of the building, and only Sorin’s transhuman hearing gave away his presence as he opened fire. To his left, an altogether less subtle warrior opened fire, the loud chugging of his heavy bolter followed by the hiss-roar of the underslung infernus heavy flamer, as he let rip into the enemy ranks, playing the weapon across the open street in front of the crate behind which Sorin and Lumiel were taking cover. Hrosh Ush’Tar had not been with Ash Squadron long, but in that time it was self-evident he was a craftsman with the weapon, his Promethean roots giving him an affinity with the flame weapon that few could match. Even so, he doubted that the flamer was capable of keeping up with the fast-moving shadows making their way across the street at breakneck speed.

Bursting from behind the shipping crate, Sanguine Judgement spinning into a position of challenge out to his right, Angel’s Wing covering his left side from neck to thigh, protecting him from any blows made from that direction. Several of the shadowy shapes resolved themselves as they skidded to a halt, reality catching up with the light footed intruders. As Sorin had broken cover to the right of the street, so Lumiel stepped out to the left, clipping his combi-plasma to his thigh and drawing the longsword he always carried belted at his waist and raising it in the classic salute of the warriors of Caliban, gently touching the crosspiece of the weapon to his lips as he whispered the name of his Primarch, beseeching him to watch over the combat from his resting place beyond the veil.

Pale flesh faced him, the Drukhari warriors wearing only small pieces of armour that appeared more decorative than practical, clutching for the most part, slender barreled pistols and a variety of hooked knives held at ease in a variety of fighting styles. This would be interesting, he thought, these must be some of the gladiatorial caste of Drukhari he had heard of, the Wych Cults who fought mainly in the arenas of Commorragh, though did sometimes accompany raiding parties to carry away the choicest of opponents for their fighting pits.

With a loud crash, Karis Junge burst into view behind the Drukhari, rock dust showering from his armour as he simply smashed through the hab wall behind which he had been waiting. The shotgun held level at his waist barked loudly, one of the enemies crumpling to the street in front of him.

The sound of the shotgun broke the pause, and several of the Drukhari made straight for Sorin, leaping and rolling as they came, dancing a dervish of death around him. He struck out with his own blade, sensing the null field flare as it struck flesh causing the hairs on the back of his arm to rise inside his armour as the static electrical field created engulfed its surroundings. Strike after strike rang down on the Angel’s Wing as the Drukhari tried to find a way through his defences. Even their pistols shots simply rang off his armour however, its blessed ceramite proof against all but the most heinous of technologies.

He could tell however that he was fighting a losing battle, there were so many of the Eldar that he could not hope to strike them all down. He heard a curse echo over the vox as Lumiel was struck from his feet, his assailant landing a kick to his jaw that sent the swordsman reeling, then crashing to the ground. Sorin saw the former Dark Angel shake his head groggily, and struggle to rise before slumping back to the ground. Incredibly however, rather than finish him off and ensure their quarry was dead, the Drukhari warriors simply ran on, disappearing into the shadows of the city.

In a devastating display of shooting, one of the enemy warriors revealed their position. Some kind of high powered energy rifle flashed out twice, the beam searing his retina with its un-light. The first shot smashed through Hrosh Ush’Tar’s weapon, setting off the heavy flamer’s fuel reservoir and causing an explosion that blew the former Salamander from the building on which he had been standing. The second was, if anything, an even greater display of shooting as it stabbed down at Karis Junge, lancing over his shoulder and through the power pack on his back, its systems shutting down and sending the veteran crashing to the ground as he could no longer move the immense weight of the armour fast enough to keep up with its momentum without the assistance of the fibre bundle muscles contained within it. As he watched his comrades cut down, he felt a tiny stab of pain in his side as one of the curved blades carried by his opponents pierced the joint between chest and shoulder guard. The bleeding stopped almost instantaneously as his transhuman physiology worked to heal the wound, but he could immediately tell something was wrong, the area began to burn up, the poison carried on the blade trying to fell the giant warrior. An Astartes was made of sterner stuff however, and Sorin fought on, cutting the legs from under one of his opponents before the venom sent him reeling once more. The poison itself wouldn’t kill him, of that he was sure, but its effects would be just as deadly if he couldn’t fight them off quickly.

The creature in front of him leaped into the air, spinning as it went, its arms and weapons tucked in tight to its body. The maneouvre would have been a credit to any acrobatic performer, a twisting, somersaulting jump designed for one purpose, a killing stroke. Sorin saw the blow coming but could do little to ward it off as his system battled the poisons within him. The Drukhari warrior came out of its spin, extending into a heel kick, the stiletto boot it was wearing aiming straight for his helm. Gritting his teeth and battling the burning in his limbs, Sorin managed to lift the Angel’s Wing into a guard position. The kick crashed home into the upper half of the shield, its power field flaring as it deflected the killing blow. The sheer ferocity behind the kick could not be avoided however, and in his weakened state it sent the top edge of the shield crashing backwards into Sorin’s own temple. Snapping his head back, his vision swam and he crashed to his knees, leaning on the haft of Sanguine Judgement for support.

Sorin didn’t know how long he must have stayed there, hanging on to his weapons, simply focusing on breathing, but when his vision returned the Drukhari were gone.

Nyx Shadowbind knelt by his side, not even the blank helmet visor of his comrade could mask the concern evident by the tilt of his head and the urgency of his movements.

“Sergeant” he said, gently shaking Sorin by the shoulder guard.

“It’s alright, Nyx” Sorin gasped in reply, his throat left raw by the venom that had so quickly ravaged his system “The poison has been defeated, I shall recover my health and my strength imminently. If only my pride could be so easily restored.”

“They broke through the veil in strength.” replied the Raven Guard, his voice little more than a whisper. Everything about the warrior was bent to concealing his presence, and Sorin frequently found that he had to concentrate carefully when in his presence, lest he forget the son of Corax was in the room at all. “And they were intent on something beyond us, we were not their quarry, nor would they be distracted from their purpose by our intervention.”

“Hmm.” Sorin growled deep in his chest, perturbed by the idea that the Dark Kindred would pass on the opportunity to take slaves. “That is not like them, their raiding parties are usually interested only in the collection of slaves, for torture, exploitation or use in their fighting arenas’. What would make them ignore such things for a wider agenda? It seems that our presence in the Taranost system will not simply be as guardians of the monitoring device. Get word back to Arhcmagos Blasthe, tell him to contact the Captain, and get us some reinforcements, I suspect that we will need them before we discover what it is that brings the Drukhari to Taranost.”

“Very well, brother.” Sorin muttered, “Call in the thunderhawk, we’ll return to the monitoring station and decide on our next course of action.”
on September 24, 2018