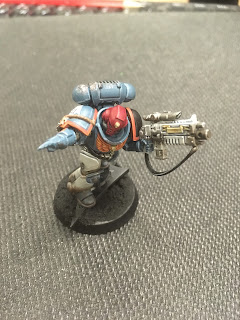 Hi all,
I’m back again! See, I’m really making an effort with this blogging thing again!

Right, last time round I left you with a promise that I would update on the direction of my Xenos armies, and I certainly will. First though, I just wanted to do a quick round-up of the hobby week. 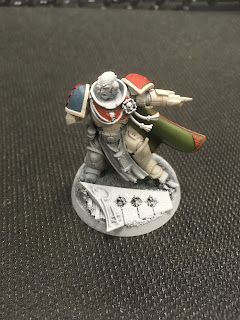 First off, we’ve got the Swords of Dawn – plenty going on with this lot at the minute, I’m painting as if my life depended on it, and having got the test mini finished, I decided to jump straight into getting Captain Vanderling of the 4th Company done. Yes, the attentive amongst you will have already noted I’m sure that my Swords of Dawn collection is focusing on the 5th Company, not the 4th, so why the heck am I painting up the 4th Captain?

Sadly the reason is terminally realistic. Having bought both Primaris Battleforces before Christmas, I found myself with two Captain models. And with two Lieutenants already from the Dark Imperium set, I figured I’d paint one up as the Captain of the Sabres, and the other I could use in those situations when I needed another Command figure, such as if I took multiple detachments. This would be Apothecary-Captain Vanderling, and so yes, having painted up a test scheme model, my next model for the army will be one that barely uses that livery at all, instead wearing the white of the apothecarion. I’m also making progress on the Repulsor, which I shouldn’t be painting yet anyway, but hey so what, it’s my army right? 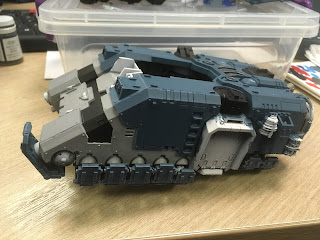 The Swords also made their solo debut on the tabletop last week and performed admirably, taking only minimal casualties as they put the disgustingly putrescent (but not so resilient) forces of the Death Guard to rout. The new Indomitus Crusaders detachment proved most useful, in particular the relic banner (combines the effects of captain and lieutenant within a 6” bubble), the reliquary of Gathalamor (which convinced my opponent to not try casting several powers given the threat of death it puts on enemy psychics) and the stratagem that turns stalker bolters into the snipers they should be.

In fairness to my opponent, his Death Guard army isn’t yet as fully fledged as it will be, and he had to make do with several less than optimal choices and didn’t have much to deal with Firestorm, my Repulsor tank.

That was my first game in the second Dark Imperium Premier League, the current standings of which can be found here (yep, at this moment it’s just me and Dave that have played a game), which will keep track of my gaming club’s results throughout the year, ranking players by their win percentage so that we can prove once and for all (as if we didn’t already know it) that Ryan is the best player at the club.

Right, so having painted up the Swarmlord before Christmas for a challenge, and then having stalled a bit on getting genestealers painted due to some commission work I needed to complete, Hive Fleet Echidna got a bit of a boost over Christmas, as I picked up the actual codex, datacards and a start collecting set, along with some crushing claws (ok, Haruspex Claws, which look exceedingly more awesome for Old One Eye) to complete my Old One Eye.

I think I’m a little creature-heavy there! So the next purchase will be some more bugs to fill out the detachment. I’d like to say it’ll be 30 hormagaunts and the last 4 genestealers, but who knows, I may very well end up buying warriors or ravenors instead. 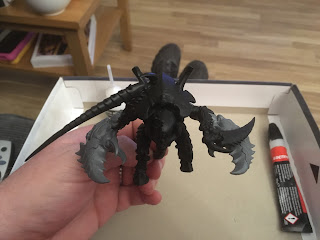 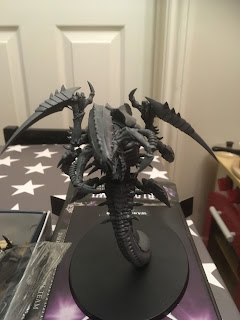 I haven’t added to these guys for a while, but I am however still tinkering away in the background. My last involvement with them was them leading Chapter Master Sevrit of the Swords of Dawn into an ambush he would not survive, but I’ve also tweaked the list somewhat to make better use of the Saim Hann craftworld trait. It’s still a 3-detachment plan, using the following layout

That gives me an extra unit of windriders for horde clearance (24 rending shots per unit? Yes please!) and the Vypers become an extremely mobile anti-tank platform to distract my opponent from my fire prisms (which I’ve found distinctly underwhelming when taken on their own rather than as a pair in my last couple of games). With the extra Farseer instead of multiple Warlocks I can really lay the hurt down in the psychic phase, and 1 Warlock is hardly a threat but buffs a unit nicely. By keeping the Vypers in pairs I can also maximise the impact of powers like Guide. I may even look to split them into a unit of 3 and a solo model to see if that’s more effective.

As for other plans, I’ve got a Dark Elf bloodbowl team waiting to be assembled for our next club league (which I’m not running this time, hooray!) 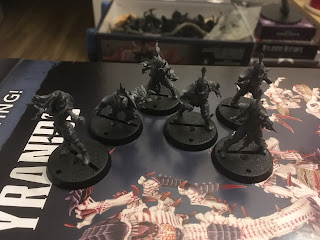 and I’ve also picked up the NOISE MARINE (sorry, you have to shout it, it’s the law).

I’ve got some secret-ish plans for him involving a little conversion work so look out for him popping up hear (see what I did there) and there thrashing out some ear-splitting riffs that echo across the 42nd Millenium.


Latest game:
Singles Win vs Iron Knights (Imperial Fists successor)
Mission: Ambitious Surge - CA19 Maelstrom
1750 pts against a list based around 6 Heavy Bolter/Missile Centurions and about 30 Stalker Bolter Intercessors. It barely moved, Nebula, my Repulsor Executioner ground down the centurions whilst everything else unloaded into the Intercessors. My opponent conceded on Turn 5 with just a few Intercessors, 2 Chaplains and a Lieutenant left.