Swords of Dawn vs Grey Knights 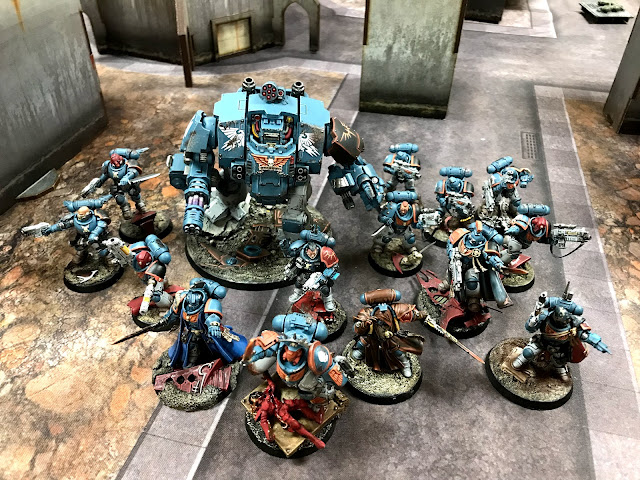 Well, last night I had one of the best games of 40k I’ve had in a very long time, possibly my best 8th edition game of all! 7 full turns and two armies slugging it out, tactical choices on both sides that affected the outcome of the game and played in a great spirit too. Thank you to my opponent James, I thought I’d do a quick report on how the game went (though I didn’t take detailed notes or photos). This game used the list from my last Primaris list evolution post. 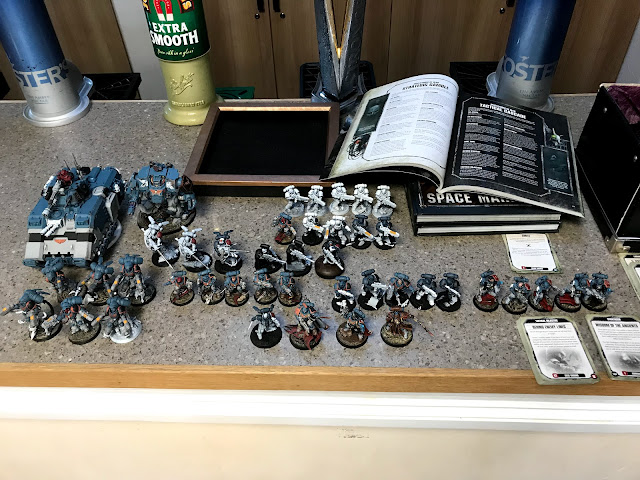 Swords of Dawn. My current list I’m working with (till GW change things up again!) is 3 detachments, a battalion, a spearhead and an outrider. The battalion consists of two 5-man Intercessor squads with bolt rifles, and a 5-man Infiltrator squad, plus the Phobos Captain and Librarian, a Redemptor Dreadnought with all the dakka, and a repulsor with a mixed weapon load, twin lascannons, heavy onslaught and onslaught gatlings, an ironhail heavy stubber, 3 storm bolters and two krak launchers. The outrider has the Phobos Lieutenant, two 3-man units of Plasma Inceptors and a unit of 3 Suppressors. Finally the Spearhead includes two 5-man units of Hellblasters and 3 Eliminators. 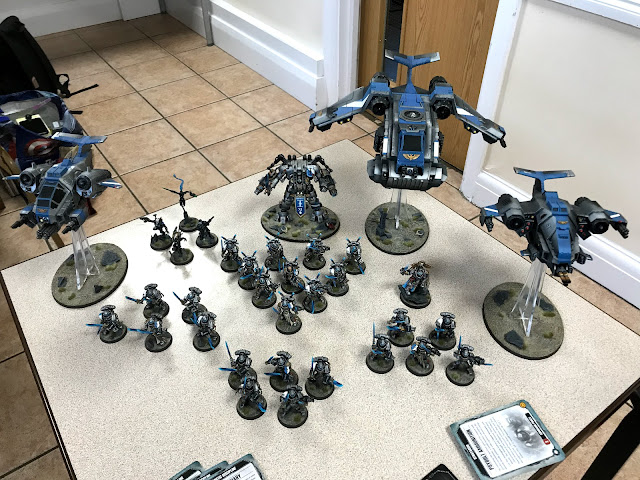 Grey Knights. Also rocking 3 detachments, my opponent had Draigo and a Dreadknight Grand Master, three 5-man Strike squads, a 10-man Interceptor squad, an air wing with Storm Raven, Storm Talon and Stormhawk, and a Vanguard Execution Force with one each of the 4 assassin types.

Mission: Strategic Gamble. Maelstrom, with 3 cards per turn and the option to trade in 2 of them for a single card that scores double points.

I’ve played James before, with a slightly smaller list (1750) so the only change was a switch from a single assassin to all four. He’s got a really nasty alpha strike with all the flyers and the ability for the dreadknight to teleport across the table (Gate of Infinity I think) so I was hugely grateful I managed to get the first turn and he failed to seize the initiative.

That being said, most of my army is pretty short ranged so my shooting phase wasn’t the greatest. I did manage to kill the Vindicare with the Repulsor’s small arms fire and one of the Hellblaster squads, and took 9 of the Storm Talon’s 10 wounds. The twin lascannons from the Repulsor managed a whole 1 damage, but the Suppressors put in a stunning round of shooting, stripping another 8 from the flyer. Sadly I had nothing else in range to try and take the last wound, but the Vindicare got me first strike.

In response as I’d expected the flyers shot across the board, and the Dreadknight did his evil 2++ trick before Gating over to target the Redemptor (my last game against James I’d brought two of them, and he’d kept trying to charge the Redemptor with his infantry squads but thanks to the adjacent Chapter Master and several failed charge rolls it managed to kill 7 Grey Knights on overwatch). Everything opened fire against it, and the honoured ancient fell (sorry Winters!). Elsewhere I lost a couple of Hellblasters and the Stormhawk took out the Suppressors (they have the fly keyword, damnit!).

In my next turn I drew Kingslayer, so everything I had in reserve came in to try and take out the dreadknight. It tanked a huge amount of fire (as you’d expect with a 2++) but the combined weight of fire from 6 Plasmaceptors and 5 Hellblasters with the buffs from a target priority warlord (buffing 3 of the Inceptors) and a Lieutenant did the job. Just. Over 500pts of shooting to take down a single model, and to add further insult, James used the ‘Only in Death’ stratagem to fire as he died, killing two of the Inceptors. The Repulsor then opened up on the Interceptors, killing 7 or 8 of them in conjunction with the Intercessors. The 3 remaining Hellblasters finished off the Storm Talon, which thankfully didn’t explode. 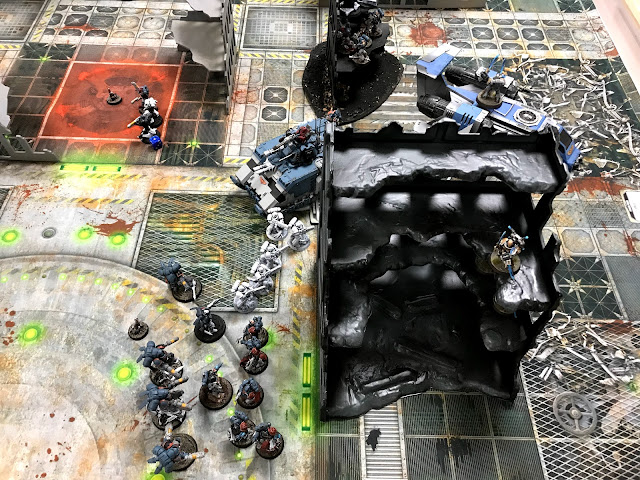 This is where my memory gets a little muddled (there was a big ruckus in the middle of the table, and I can’t remember precisely who killed what or when) but suffice to say the Eversor popped up and charged the 3-man Hellblaster squad, but only killed 2. The Callidus and a strike Squad appeared to take on the Inceptors, who played Auspex Scan and wiped out the Grey Knights (probably should have gone after the Callidus, but I was feeling generous) and were in turn killed by the Stormhawk (damnit, fly keyword again!). The Callidus charged in and killed the Captain and Lieutenant with some help from Draigo, but only after they’d killed the remaining Interceptors. Another Strike squad charged the bigger Hellblaster unit but whiffed and that combat ran for ages before the gunners eventually fell back to make space to shoot but got cut down before they could.

The Culexus popped in to target the Phobos Librarian, eventually taking him down in combat before working his way through the central unit of Intercessors and Eliminators (damn that hitting on 6’s, I’d have killed him several times over were it not for that rule). The Repulsor dominated the centre of the board, eventually gunning down the Eversor before in turn getting wrecked by fire from the flyers, the Storm Raven also took out the Captain, and the second unit of Intercessors, although in an effort to help out, the Stormhawk flew itself into a corner and ended up getting destroyed as it had no option but to fly off the board.

I’d been tabled. But all was not lost, we were playing a mission from Chapter Approved 2018 and acceptable casualties was in play, and I was ahead! Plus, the Storm Raven was down to its last wound, as was the Culexus and the Callidus only had 2 left (I think, maybe 3) and Draigo was on 4. We’d thrown absolutely everything at each other (and boy was I regretting not targeting that Callidus now!) and now it was all down to the cards, but at the start of turn 7 I had 23 points (that Stormhawk flying off the board had netted me Big Game Hunter) to my opponent’s 15. He scored 3 that turn, leaving me with a hard fought victory! Of course, most of my army hadn’t actually died, being a successor to the Raven Guard their stealth and covert ops skills are par excellence and so in fact my squads had simply slipped away into the shadows once their objectives were achieved (no, I’m not going to come up with more new names for a load of infantry!)

Awesome game, and I must say, two pretty well-matched armies. I think I dropped a couple of surprises onto my opponent with the Plasmaceptors using Target Priority, and the Suppressors making a huge dent in his Storm Talon, but equally the Culexus was a huge pain in the backside for the whole game - I can take that Psykers suffer penalties against him but why should normal models only hit him on sixes as well! Similarly, I had enough fly keyword units that the Stormhawk made a real nuisance of itself, and the Storm Raven proved its worth even when it was down to a single wound. Had the Redemptor survived to do something (seriously, anything, I advanced it in my turn 1 and it was dead by the start of the second battle round) I think I could have turned the slightly hollow victory into a more convincing win, but then sometimes that’s just how things go, if I’d not advanced him then I’d have got cover saves against a lot of the shooting that hurt him, and considering I failed about 4 of those by only a single point he may have survived longer if I’d not been quite so keen to move him up the board against an army that I know comes straight at me.

Anyway, awesome game, really close and we were both on the edge of our seats at the end, and James is a great opponent, friendly, plays hard but fair and boy does he know how to use the tools he has. I’d say Grey Knights are suffering as much as people make out, but then the Marine codex doesn’t really provide the toughest of tests either. I would really appreciate getting some more effective stratagems sometime soon, because my 10 command points were largely spent irreverently on a few things I really didn’t need to do (auspex Scan excepted).
on April 28, 2019