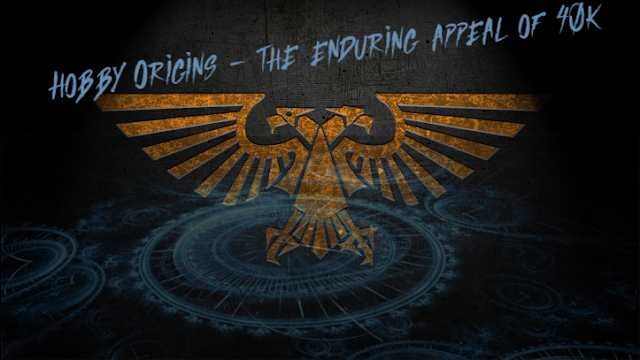 Greetings all! Once again real life has been intruding on my time to dedicate to the blog, but here's the second article in my hobby origins series - the legendary Mr Marc van Holst!

Checkout his own blog at Old School Gaming, and enjoy!

If you'd like to take part in the series, drop me a line at theburningeyeblog@gmail.com.

This article has been difficult to write, as I have been questioning what is keeping me in the hobby recently and have conflicting feelings about it. Essentially, I have been trying to understand what it is about the hobby that I have enjoyed so much in the past, and reconcile that with my current experience and the state of the game. I know my hobby origins very well, but after writing the same old story again, I realised that the events that have led me here are not as interesting as the sentiments that went along with them.

My father has been a huge influence when it comes to fine scale modelling. After his accident when I was a toddler, we didn’t have many things we could do together as a father and son. One of our favourite things to do was aircraft modelling and painting, primarily Revell kits.

This was one of the first kits we built together. He stayed up all night to paint it, so that I could take it to show-and-tell the next day; a fact I often think about when pulling an all-nighter to finish a 40k project.

He taught me all about paying attention to detail: cleaning up the mould lines and using glue sparingly, painting cockpit interiors before fixing the canopy and the gently heating and bending warped pieces. Throughout it all, there was the impression that taking your time and doing things right was the only way to do justice to the model, and there was great joy in that mastery (or, at least, knowing that you did your best). Looking back now, a lot of my father’s love was expressed through those hobby experiences. I still feel it when I am working on a project, which is one reason I have continued in the hobby for such a long time.

Of course, growing up in the 80’s, it was hard not to be enamoured by Star Wars and the glut of Fantasy and Science Fiction toys on the market. My family was a fairly poor one, at least by Australian standards at the time, so I didn’t have many toys growing up (besides, those aircraft models and modelling consumables were expensive). My cousins, on the other hand, were swimming in action figures. I vividly remember walking into their room and seeing two glass jars filled with plastic Transformer guns. I don’t think envy is the right word for how I felt about it. I couldn’t conceive of a world in which I had enough Transformers to require two glass jars just to store their guns, and I could pick and choose which gun to put on each Transformer from the entire collection. My friends at school were the same, with huge Lego, Star Wars, GI-Joe and He-Man collections. When I went camping for the Christmas holidays, my mates at the campsite had a massive collection of Dino-Riders, which we played with every day. I think I would be lying to myself if I didn’t say that 40K has been making up for all of those years, spent wistfully playing with other people’s toys!

Dino-Riders. I have often thought about converting an Eldar Exodite army using Lizardmen figures to make them look like this. I may still do it…

As I grew out of the “playing with toys” phase, I started spending time with friends who played board games and were just starting to experiment with tabletop wargaming. I was introduced to Space Crusade, HeroQuest and Epic 40K. In them, I saw the fun of playing with action figures being combined with modelling (constructing and painting) and gaming (throwing down dice and following rules). The idea of making a model that you could then actually use for something was very exciting for me. At the same time, the gaming aspect went a long way to legitimise “playing with toys” for a little bit longer (i.e. 30 years).

If GW released a new Space Crusade I would buy it in a flash.

Everything was still way too expensive for me to own myself, however. The closest I could get was gaming books, in particular, the Lone Wolf series. I took a Lone Wolf book to my first day at High School and happened to sit next to a guy who was also a fan. By the end of the week we were best friends and would remain so, until his death, just last year. We formed the nucleus of a growing group of gamers at school, who dabbled in Dungeons & Dragons, Dragonlance, BattleTech and Magic: The Gathering. I went camping one year and met up with those guys who used to have the DinoRiders, and they introduced me to Warhammer 40K.

Me learning about Eldar in 2nd Edition, during a camping trip back in the mid 90’s. I was eating a Snickers at the time.

I was deeply inspired by the exoticism of the 40K universe, which easily trumped the old Star Wars tropes of laser guns and lightsabres. I was very impressed with the way the rules, templates, blast markers and different dice combined to bring all of these crazy concepts to life. I spent a few nights transcribing the Angels of Death Codex and Rulebook, by hand, so that I could play it myself at home. I also hand-drew 2000 points worth of Dark Angels on folded cardboard, which we used to play our first games on the camping table in my caravan. I desperately wanted to play more, but knew that the cost of the game would be an issue.

I introduced 40K to my mates at school when I got back from the camping trip and we added it to our repertoire of games. I sold a heap of Magic: The Gathering cards to buy my first models; Terminators, a Librarian in Terminator armour, Scouts and Brother Bethor. I was using my old modelling skills to produce playing pieces, which I could then use for gaming with my mates, and which fulfilled those sci-fi action figure dreams of my childhood. Bliss!

Over the next 10 years, many of my mates would stop collecting 40K miniatures, primarily due to the changes made to the game when 3rd Edition hit the shelves. It really took the wind out of a lot of people’s sails. We would still play games from time-to-time, however, and they seemed to enjoy following my exploits as I continued to work on projects.

Heinz, Wade and I playing a 4th Edition game. These days I would demand more terrain, but my Predator really enjoyed the clear lines of sight that game!

This was the start of my current era of 40K involvement, driven by a love of the figures, the craftsmanship required to get them on the tabletop and the exoticism of the 40K Universe. I took to blogging about my projects, so that my mates could stay in touch and I could post about the few games that we played, for those who didn’t make it on the night. Whilst the underlying driving forces remained the same, I was starting to use 40K as a context to stay connected with my friends. I also started to make new friends through blogging, as we encouraged each other and shared hobby knowledge.

My most recent Azrael.

So, here I am. I still love the modelling and painting aspects of the hobby; they are the cornerstone of the hobby for me. The exoticism of the 40K universe is still there, though I feel that the way it is enacted on the tabletop has lost some of its spunk. I really miss rolling all of the different dice, as well as using templates and blast markers. Additionally, as a father and teacher, I have found that my hobby and gaming time has been dramatically reduced, in line with my increased responsibilities. Basically, I am just getting old.

Seydon, Chapter Master of the Iron Snakes, from Primaris stock.

Where do I go to from here? Well, to start with, I have established end goals for each of my current armies, which are all achievable within 12 months. My Dark Angels will be used for 2nd Edition games, so all of my current Dark Angels projects are geared towards reflecting that ruleset now. I am really looking forward to getting into some “retro” gaming and rediscovering the spark that got me into the game in the first place. My Tyranids are a fairly competitive 8th Edition Jormungandr list, but I have no plans to add to them further.

My Iron Snakes have always been purely for artistic expression, sporting many non-Codex wargear combinations. They will get a few converted Primaris additions this year, as well as some heavy firepower from Forge World. I have one and a half Imperial Knights left to construct and paint. Emperor willing, I will finish the last one, “Achilles” Aeternum, for DreadTober.

Where fate leads me after that, who can say… but I’m pretty sure it will have something to do with the massive Space Hulk project I have planned. And the five Kill Teams I have started. And perhaps some Idoneth Deepkin… Or some Eldar Exodites riding dinosaurs…

If any of that sounds interesting, I’d love to share it with you on my blog: https://oldschoolg4m1ng.blogspot.com/

See you across the table,
Marc

Eddie and the Troopers, my Iron Maiden themed Necron Kill Team
on June 26, 2019


Latest game:
Singles Win vs Iron Knights (Imperial Fists successor)
Mission: Ambitious Surge - CA19 Maelstrom
1750 pts against a list based around 6 Heavy Bolter/Missile Centurions and about 30 Stalker Bolter Intercessors. It barely moved, Nebula, my Repulsor Executioner ground down the centurions whilst everything else unloaded into the Intercessors. My opponent conceded on Turn 5 with just a few Intercessors, 2 Chaplains and a Lieutenant left.