Just my luck eh? I finally get back to a more regular routine of blogging and then my laptop goes and dies on me!

Still, I have a replacement now, so things should get back to being regular once more - hopefully you've been able to keep largely up to speed with what I'm working on via my other social media outlets (see the Contact me section on the right if you don't already follow me elsewhere).

So, what have I been working on since I last posted?

Well first up, I've been painting (of course!)

I was painting infiltrators and working on an Idoneth commission when you last saw - no surprises I'm still working on the Idoneth - it's a big project! 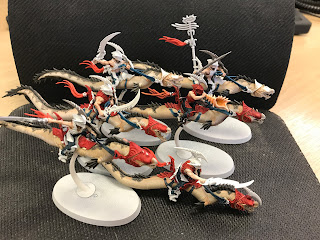 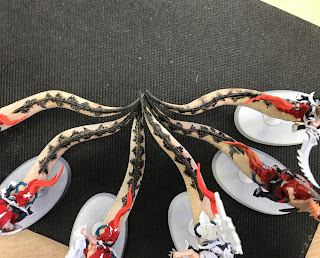 Don't get me wrong, I'm pleased with how they're coming out but man, it's slow progress over the white basecoat!

On the marine side, I've got more of the Infiltrators done, including transfers, and the other day I started work on this fella. 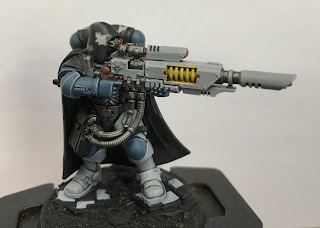 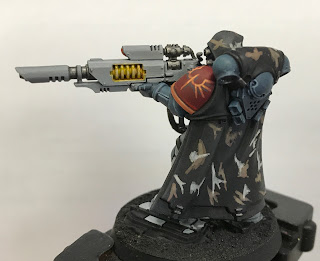 Can't wait to use him in a game properly, instead of proxying him and his squad!

I also managed to get this unit finished before I transitioned fully onto the commission stuff. 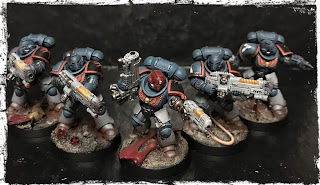 On the gaming side, I've had mixed results - on the one hand, the Swords of Dawn are sending all others running before them - yes, marines are sat comfortably at the top of the tree for now above all other factions, but equally I also managed to get the win over the dreaded Iron Hands in our club knockout tournament. Next up at club are the Imperial Fists, with a Centurion bomb (at least that's what I'm expecting) and the next round of the knockout sees me take on the Alpha Legion against Ryan, our best player. I've played him twice since the new marine book came out, and both games have ended as a draw (one cut short because of time issues). Hopefully I've got the strategy right to pull off the win this time.

On the flip side of that, I brought my Nids out again last week at club, teaming up with our occasional GSC player. We fought Dark Angels and Ultramarines and it's safe to say we got trounced! Hardly surprising, but the issues I had in that game did lead to me re-thinking the Tyranid list somewhat, which brings me on to the next point.

I do love writing a list, and it's safe to say that I've been doing a lot of that recently, refining and tweaking my marines, and ripping up and starting again with the Tyranids! I've ditched the all-out assault based list I was working on for now, and have drafted in a second battalion using the Kronos hive fleet adaptation to complement my Kraken combat battalion. This is as a result of my last game, which highlighted a major problem of the combat list. My opponents castled up on a piece of terrain, and because of the way he'd deployed, I was forced to either charge some chaff units I was bound to destroy, leaving me open to being blasted off the board in their turn 1 (which is what happened) or standing around in the open waiting to be shot off the board. What I was missing was some strong ranged options - if I'd been able to cause some casualties as my combat units approached their lines, I could have a least blown a bit of a hole into his castle that my rapid genestealers could have exploited. Instead, there was no room on the terrain for me to get into base to base contact therefore I couldn't charge and instead my 28 genestealers killed a grand total of 5 intercessors before they got smeared across the desert.

I'm hoping to start doing a series of list building articles again on the blog going forward, to crystallise my own thoughts processes as much as to provide insight to others.

Finally, I've been working on adding more meat to the bones of my narrative behind my armies. I'm starting with the Swords of Dawn, and have set up a link on the left of the blog to allow you all to read the fluff behind the army. My intention is that this will develop as I play campaigns against my friends - I'm even resigned to killing off characters when necessary to keep the narrative flowing instead of having immortal leaders of the Chapter. That's not to say every time a captain falls he'll get replaced of course, I'm going to have to think of a clever way of dealing with that!

Still, hope you enjoyed reading my latest brain dump onto the internet - this series will hopefully become a regular thing once more, and I'm probably looking to get it going live on a Friday evening for those who like to know they can check in on a regular schedule.